I was fortunate enough to visit Congo Brazzaville (just celebrating their 50 years of existence) to present at the jCertif conference, probably the biggest Java event in central Africa. I was expecting an adventure and an experience. I wasn’t disappointed. So of course this is Africa and I probably shouldn’t be surprised to see children cross the runway only seconds after the plane had landed. The food (fish, meat, chicken and bananas!) was great and the crowd welcoming. I had had a taste of what to expect when chatting with Max Bonbhel, the organizer of the conference, a leader of the CongoJUG (great logo btw), and overal an entrepreneur. 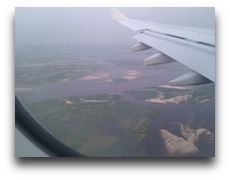 Max had arrived a week early (he lives in Canada) and had to find a venue, sponsors and take care of all the logistics. He did great with the event finally taking place in the National Center of Congress with the support of the ministry of New Technologies and major telcos as the sponsors. He also managed to get the two of us to appear for an interview on national TV the day I landed to promote the event (and our respective topics).

Congo Brazzaville seems to be, like other countries in this part of Africa, (finally) experiencing a shift to broadband with a fiber backbone coming up in 2011 and the younger generation starting to slowly take advantage of the new IT opportunities this will bring. Infrastructure is still a big concern with the capital city still experiencing unplanned and \*planned\* electricity outages (not a good idea to be in the elevator at that time). For anyone telling me that Internet access and bandwidth are no longer a problem anywhere in the world, I can now share that downloading a 50MB GlassFish archive will take a good 8 hours (download size does matter here, CDs are welcome), that SVN worked sporadically for me (if at all), and that watching streamed video is just not an option. Internet access is still very expensive and you are asked to think twice about bandwidth. This obviously makes it still a bit hard to do business on the Internet but with infrastructures improving by the day the country is waking up to the possibilities.

The conference itself was held in an impressively large room which I understand is where the parliament meets. Access to the conference wasn’t free but costed only about the price of a softdrink. About 300 people participated, some coming from neighbor Congo (CDR), others flying from Togo, Kenya and other countries. Max kicked off the day with a talk about web 2.0 and the impact it will have from a social, technical and business point of view. Mike Levin (freelance consultant, Swampcast podcast, codetown.us, …), straight from Florida and also a JUG-addict (he runs no less than 4 JUGs) then got down to some more details about the technical building blocks of web 2.0 development. It was great to meet Mike (we stayed in the same hotel) as I could help him with his French (the official language here) and he’d teach me the lingala (local dialect) words he had learned (Keetoko!). We also found out that we had a great deal of people in common. Check out his post about the conference.

The next speaker was Horacio from Togo talking about Talend. His talk was a great balance with a few slides to set the stage on ETL’s and about a half an hour demo which is usually too long for people to follow along but this one progressed very nicely. I then presented on Java EE and GlassFish (slides), trying to start slow for the people that hadn’t used it before but also covering Java EE 6 new features for the more advanced crowd (I got some pretty advanced questions during lunch). Finally Stanyslas from Kinshasa presented the NetBeans platform for building rich applications and in particular the RAMS (Refugee Assistance Management System) application he’s building for the United Nations’ HCR (refugee organization). A good didactic talk, NetBeans Platform extraordinaire Geertjan would have been proud!

The event continued for another 3 days of training and preparation for the Java Certification. This is free training and the deal is that if you attend (80 people showed up on the first day) you need to train others yourself in the next 6-9 months. This is just a moral obligation and training a couple of people over a few hours is good enough. I think this is a great initiative and a great way to build communities, something that feels pretty natural to the people I’ve talked to while in Congo Brazzaville. 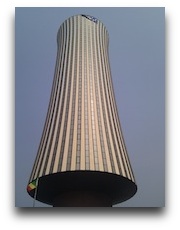 While writing this it occurred to me that I’ve now traveled to all main continents (still working on Antartica) to talk about GlassFish!

Google Developer Relations in Paris. View all posts by alexismp

5 thoughts on “Back from Brazza”